Welcome to our Glass Encyclopaedia, our very own identification guide to Antique & Vintage Collectable Glass. Over the years, as dealers in glassware, we have taken thousands of pictures of glass vases, bowls, paperweights, sculptures and other glassware. After we have sold an item, it seems a shame to delete those pictures, so we use them to create an encyclopaedia guide in the galleries shown below. We hope they will enable you discover more about the types of glass products that you are interested in collecting, or help you to identify a glass item you have come across. Please note, we are well aware that there are some gaps, for instance, we don't have much on French or American glass, this is simply because, as glass dealers in the UK, we don't come across that much of it, so we don't have many pictures with which to create a guide. Our glass encyclopaedia is aimed to be as accurate as possible. However, if you feel we have made a mistake, please contact us. We are constantly improving and extending our glass encyclopaedia and galleries, so please check back frequently.

Most of the glassware items listed in these sections are from our past sales, and are no longer available to buy. To see all antique + vintage collectable glass that we currently have in stock, please:

Shop for Murano Glass in our Online Store

The term "Murano Glass" defines glass produced on the island of Murano, near Venice, Italy. There are many different manufacturers, both past and present, based on Murano. The history of Murano Glass began in 1291, when concerns about the risk of fire to the mainly wooden buildings of Venice lead to the many glass manufacturers there being ordered to move their premises to the small island of Murano, just off the coast of Venice, Italy. Murano was already a busy trade port at the time. Murano glass artists soon became renowned for their skills in glass design, and had a monopoly on glassware production for several centuries. The Murano glass industry boomed during the 1950's/60's, exporting a vast amount of Venetian glassware as well as producing a large quantity of glassware for tourists visiting Venice. Murano glass production is still extremely active today.

Due to the success and popularity of Murano glass with collectors, styles of glassware that originated on the island of Murano have been reproduced elsewhere, often of much poorer quality. These days, a lot of "Murano" glass sold on eBay or at antiques & collectable fairs can actually turn out to be made recently in China. When collecting glass, to avoid accidentally buying glass that wasn't actually made in Murano, it is a good idea to familiarise yourself with the current styles of glassware that are of Chinese origin. The best places to do this are on the website www.alibaba.com or in your local TK Maxx store. 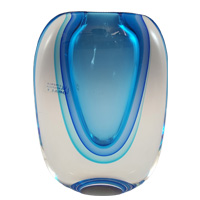 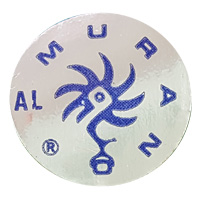 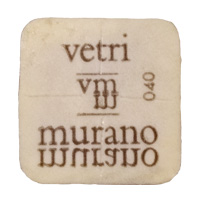 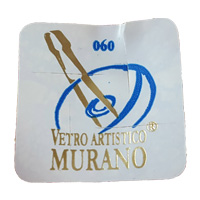 Shop for Empoli Glass in our Online Store

When most people think of Italian glass, they think of the many manufacturers based on the Venetian island of Murano. But there is another area of Italy with a long history of glass production - the town of Empoli, in the Tuscany region, near Florence. There is evidence of glassware being produced in Empoli as far back as the thirteenth century. There are two main types of Empoli glass - "Verde" and "Cased". Verde (Italian for green) glass takes its name from the traditional green colour of Empoli glass, which was a result of the content of local sand used for glass production. Empoli manufacturers that produced Verde glassware include Vetrerie E. Taddei & C., Vetreria Etrusca, Vetreria Toso Bagnoli, CLAVE, and Vetrerie Empolesi. Later, cased glass became popular in Empoli, which consists of brightly coloured glass cased in a layer of clear glass, sometimes also having an internal layer of opaque white "Lattimo" glass. Some Empoli producers of cased glass are STELVIA, Cristalleria Fratelli Betti, Cristalleria Arno, CIVE, and SAVIA. There was, and still are, a large amount of manufacturers in the Empoli area involved in glass production, and it can often be difficult to identify designs by a particular maker, as any labels usually bore the name of importers, or simply read "Made in Italy". Companies that imported glass from Empoli include Alrose, Rossini, Guildcraft, Vimax, Enesco and Hans Geismar.

Shop for Scandinavian Glass in our Online Store

A large amount of stylish, artistic and functional Scandinavian glass has been produced for several centuries. The most notable Scandinavian country with a thriving glass industry is Sweden, particularly the region of Småland, where glass production began in the mid 18th century. Denmark, Finland and Norway are also home to popular manufacturers of Scandinavian glass.

Shop for British Glass in our Online Store

The skill of making glass was brought to Britain by the Romans, but it was not until the 16th century when Venetian glass manufacturers came to Britain that British glass making began on a large scale. The invention of the coal burning furnace in the 17th century lead to glass production being moved to areas such as Stourbridge, to be close to the coal mines. To this day, these areas are still the centres of the British glass industry. This part of our encyclopaedia covers British glass makers of the 20th century.

Shop for Czech / Bohemian Glass in our Online Store

Czech / Bohemian glass has been in production since around the 13th century. Popular areas of Bohemian glass production were Novy Bor, Skalice and Kamenicky Senov. It is important to note that Bohemia became Czechoslovakia in 1918, and in 1993 became the Czech Republic. This means that glass made after 1918 should be referred to as 'Czech glass' rather than 'Bohemian glass', although to confuse matters, many items of glassware produced during the 1950's and later, bear labels that read 'Bohemia Glass' or 'Bohemia Crystal'.

Shop for Maltese Glass in our Online Store

Maltese glass production really began in 1968, When Michael Harris from the UK moved there to set up Mdina Glass, which began producing freeformed organic glassware, often in colours inspired from the sea, sand, earth and sky. Mdina glass was an instant success, partly due to the strong tourist industry of Malta, and prompted several other Maltese glass companies to form, such as Mtarfa, Gozo, and Phoenician glass.

Shop for German & Austrian Glass in our Online Store

A wide variety of glassware has been produced in Germany and Austria over the years, including a large amount of Art Nouveau, Art Deco and Mid-Century glass.

Shop for Art Deco Glass in our Online Store

The style of Art Deco glass began during the 1920's and lasted until around the 1950's. The art deco movement began in Paris in 1925, and was popular throughout Europe during the late 1920's, spreading to America by the 1930's. Most art deco glass was produced in Europe, mainly by French, British, German and Czech manufacturers.

Shop for Victorian Glass in our Online Store

Victorian glass is defined as styles of glassware that were produced during or close to the Victorian era of the United Kingdom (1837 - 1901) during the reign of Queen Victoria. Most of the glass shown in this part of our guide is of English origin, or Bohemian glass very similar in style, originally produced for the British and American markets.

Shop for Glass Paperweights in our Online Store

Decorative glass paperweights were first produced in around 1845, mainly in France, by several manufacturers including Baccarat and St Louis. Glass makers in other countries soon followed suit. The traditional shape of a glass paperweight is spherical, with a flat or slightly concave base. Paperweights usually contain some sort of pattern in the centre, which is often "magnified" by the thick clear glass around it. Typical patterns for paperweights include the use of floral Millefiori canes, lattice Latticino / Zanfiroco filigree, and encased air bubbles. Over the years, other shapes have been produced, including many kinds of animals and other figurines.

Shop for Vintage Glass in our Online Store

This section of our glass encyclopaedia lists vintage collectable glassware that doesn't fall under our other categories.

Just wanted to say, THANKYOU!! Your website has been a fantastic help for my glass collecting addiction!

Hi, I love your website.  I've just ordered a book through it so hopefully that will give a little back to you.

Hi, I just wanted to say thanks so much for making this website. I have been looking at it on and off for years. Such a great resource.

This site is been the "FIND" of my dreams. Thank you so much for creating an amazing site with a world of knowledge for us all to unitize. Very helpful, easy to navigate... PERFECT!!!! is the word.

I just wanted to tell you how wonderful, knowledgeable, and user friendly your web site is. It has been a pleasure taking a tour through your inventory. I will check in often to see what new stock you are advertising.

Your website is great and easy to use, i find it very useful as im a novice at glass identifying, Im glad i found you on Google and will use your website for future use.

Thank you for your website! I was able to know the maker and origin of about 19-30 pieces of art glass that I have collected throughout the years. Your site was a wealth of information and I love it.